VANCOUVER, June 5, 2018 /CNW/ - New Dimension Resources Ltd. (TSXV: NDR) (the "Company" or "New Dimension") is pleased to announce that a 5,000 metre ("m") diamond drill program has commenced on an initial four high grade gold-silver targets at its 100%-owned Las Calandrias and Los Cisnes projects, Santa Cruz Province, southern Argentina. This "Phase I" program will consist of 3,500m of drilling on three gold targets at the flagship Las Calandrias Project (Calandria Norte, Morena, and Refugio), together with a further 1,500m on the high silver-gold grade Brio vein/breccia target at the Los Cisnes Project.

Eric Roth, New Dimension's CEO, commented today: "I am delighted to announce the commencement of drilling on four high-grade gold-silver targets at our Las Calandrias and Los Cisnes Projects. The majority of previous work at Las Calandrias had focused on defining the bulk-tonnage, low-grade Calandria Sur deposit. In contrast, New Dimension sees tremendous opportunity to explore for additional high-grade gold mineralization around the Calandria Norte resource area, and the Morena and Refugio targets. At Los Cisnes, previous sampling and scout drilling identified high-grade silver mineralization in the Brio vein/breccia, and this program will seek extensions to this recently-discovered mineralization.

Results of this ongoing drill program will be released over the coming months, and will culminate in the preparation of an updated Mineral Resource Estimate (MRE) for the Las Calandrias project. This updated MRE is currently scheduled for release in mid-September, 2018.  I look forward to keeping the market informed on progress as drilling advances".

Prior to New Dimension's acquisition of the Las Calandrias Project, previous work had focused on evaluating the gold-silver resource potential of the Calandria Sur deposit, a bulk tonnage rhyolite dome-hosted deposit located in the southern portion of the Calandria I mining claim. However, sufficient drilling had also been completed along approximately 400m strike length of the NE-trending Calandria Norte vein/breccia system, which allowed for the declaration of an Indicated Category mineral resource of 162kT @ 9.35 g/t AuEq1,2 (see also Appendix 1). Significant intercepts from a central high-grade shoot at Calandria Norte that were reported by Mariana Resources Ltd3 include:

As the Calandria Norte vein/breccia zone remains open to the north and south (and potentially down plunge), the testing of possible extensions to the known high-grade gold-silver resource area represents an immediate priority for the Company.

The Morena vein/breccia system lies immediately to the northwest of Calandria Norte and has seen only limited drilling. Outcrops along the vein system returned gold grades ranging from below detection ("BDL")(<0.1 g/t Au) to a high of 116 g/t Au. The current interpretation is that the Morena vein/breccia zone strikes northeast (i.e., is sub-parallel to Calandria Norte) and dips steeply to the east-southeast. A total of 11 drill holes were completed in the southern part of the Morena zone, with the best mineralized intercept being 0.6m @ 68.1 g/t Au + 107 g/t Ag from 59m downhole in CND250. The northern extension of the Morena vein remains completely untested, where chalcedonic silica, similar to that observed in the northern part of the Calandria Norte vein, is exposed on surface. This geologic similarity to Calandria Norte reasons that the Morena drilling should initially be focused on testing around 100-150m vertically below surface.

The Refugio target lies approximately 6km west of Calandria Norte, and consists of a 1.5km-long, northeast trending sub-cropping vein/breccia system with high anomalous molybdenum concentrations (from BDL to 800ppm). The Refugio vein/breccia system has not yet been drilled, so scout drilling of this target will form part of the current drill program.

Additional targets at Las Calandrias include the Despreciada/Nido vein system, which is defined by classic epithermal vein textures on surface yet has only seen very wide spaced previous drilling, and the Pichones coincident geochemical / geophysical anomaly (to date undrilled). However, drill testing of these targets is expected to take place in a future drill program.

At Los Cisnes, high-grade silver(-gold) values were identified from previous channel sampling and scout diamond drilling on the Brio vein/breccia system. Brio is a quartz-sulfide vein/breccia system which strikes ENE, can be traced on surface for approximately 2.3km, and is up to 3m wide. Channel samples taken by Mariana Resources Ltd3 had returned assay values ranging from BDL to 0.8m @ 3,840 g/t Ag + 3.0 g/t Au. In 2015, 8 scout drill holes for 723m were completed along the Brio structure, with the best intercept being 2.9m @ 755 g/t Ag from 32.1m downhole in LCsD-09.

For the current 2018 program, drilling will focus on testing both lateral and down-dip extensions to this high-grade drill intercept. These offset holes will initially be done at 50m step outs with a possibility of 25 m if warranted. The drill program will also be designed to test for possible parallel mineralized structures to the main Brio structure.

Drill target generation activities at the Sierra Blanca Project will continue in parallel with the current drill program at Las Calandrias and Los Cisnes. However, the drill testing of high grade targets at Sierra Blanca is not expected to occur before Q4, 2018, at the earliest. Reconnaissance activities on the Company's Regional Prospects are also anticipated to restart after the termination of the Patagonian winter.

The Company also reports that the Board of Directors has granted, subject to TSX Venture Exchange approval, an aggregate 3,350,000 incentive stock options to directors, officers, employees and key consultants to the Company. The stock options are exercisable at a price of $0.25 per share and will have a term of 5 years, expiring on June 5, 2023. Each stock option will allow the holder to purchase one common share of the Company.  All stock options granted are subject to staged vesting periods.

On Behalf of the Board of New Dimension Resources Ltd.

About New Dimension Resources
New Dimension is engaged in the acquisition, exploration and development of quality mineral resource properties throughout the Americas, with a focus on precious metals.  The Company's current focus is on the discovery through drilling of new high-grade gold-silver resources at its 100%-owned Las Calandrias, Los Cisnes and Sierra Blanca projects, all located in the highly prospective Deseado Massif of Santa Cruz Province, southern Argentina. The Company also holds an option on the Savant Lake gold project in Ontario, together with an active JV interest (with Yamana Gold) in the Domain gold project in Manitoba.

Qualified Persons and Disclosure Statement
The technical information in this news release has been prepared in accordance with Canadian regulatory requirements set out in NI 43-101, and approved by Eric Roth, the Company's President & CEO, a director and a Qualified Person under NI 43-101.

This news release does not constitute an offer to purchase securities. The securities to be offered in the Private Placement have not been and will not be registered under the United States Securities Act of 1933, as amended, or any state securities laws and may not be offered or sold in the United States or to, or for the benefit or account of, a U.S. person, except pursuant to an available exemption from such registration requirements. 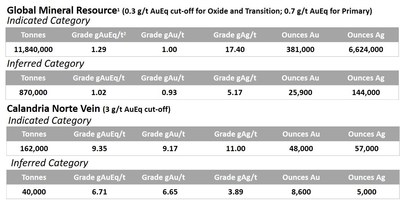