VANCOUVER, BC, Feb. 22, 2022 /CNW/ - Capella Minerals Ltd. (TSXV: CMIL) (FRA: N7D2) (the "Company" or "Capella") is pleased to announce that it has received approval from the Norwegian Directorate of Mining for the Company's maiden diamond drill program at its 100%-owned Kjøli copper-zinc-cobalt ("Cu-Zn-Co") massive sulfide ("VMS") project in central Norway.

Permits have been granted for up to 4,000m of diamond drilling in 25 holes (Target Areas A-D; Figure 1). Four main priority areas have been defined for drill testing: i) the Grønskard, Kjøli, and Guldalsgruva targets located along the main prospective horizon for VMS deposits, and ii) a large (>2km strike length), deep (>350m) electromagnetic ("EM") conductor at Kjøli Deeps, which is interpreted by the Company to represent a buried, NW-dipping massive sulfide body.

Initial logistical planning for the Kjøli drill program assumed 100% ground support for the drill rig, with key off-road permits having already been obtained from both the Holtålen and Tydal municipalities. However, excessive winter snowfalls have hindered access to some of the target areas and, as a result, helicopter support will now also be required. The Company has applied for the additional approvals required for helicopter-supported operations, and these will potentially allow for the initiation of drilling by mid-March.

Eric Roth, Capella's President and CEO, commented: "I am pleased to be reporting that we have received approval from the Directorate of Mining for our inaugural diamond drill program at Kjøli. In parallel, strong community support for the project is evidenced by the approval of key off-road permits from both the Holtålen and Tydal municipalities. However, recent inclement winter conditions have required the Company to apply for additional permits for helicopter-supported operations, with these permits expected to be obtained by mid-March.

As reported previously, our drill target generation activities at Kjøli have been focused on the definition of high-grade Cu-Zn-Co targets located both along strike from, and adjacent to, the past-producing Kjøli and Killingdal copper mines. However, a significant new target has also been defined at Kjøli Deeps and will be a priority for our drilling. I look forward to keeping the market updated on our progress at Kjøli."

The Kjøli copper project is located within the northern extension of the Røros mining district, which saw production from a number of high-grade copper-rich VMS deposits from the mid-1600's until low copper prices in the mid-1980's resulted in their closures. Kjøli represents a brownfields/greenfields exploration project covering the former Kjøli and Killingdal copper mines, together with some 20km strike of underexplored but highly prospective stratigraphy for the discovery of new copper-rich VMS deposits. Historical copper grades from the former Kjøli mine were reported to be 2.9% Cu1.

Exploration activities completed at the Kjøli project in 2021 included a systematic soil sampling program (2,800 samples) and a gravity survey (a common exploration tool utilized in VMS exploration programs globally but utilized for the first time in Norway at Kjøli).  Results from these field programs were combined with results obtained earlier from the CARDS AI/Data Mining target generation work and have allowed for the definition of 25 drill sites in 4 main target areas. The Company will also evaluate cobalt concentrations, an important battery/EV metal, in the Kjøli mineralization in economic evaluations going forward.

The technical information in this news release relating to the Kjøli copper project has been prepared in accordance with Canadian regulatory requirements set out in Canadian National Instrument NI 43-101, and approved by Eric Roth, the Company's President & CEO, a Director, and a Qualified Person under NI 43-101.  Mr. Roth holds a Ph.D. in Economic Geology from the University of Western Australia, is a Fellow of the Australian Institute of Mining and Metallurgy (AusIMM) and is a Fellow of the Society of Economic Geologists (SEG). Mr. Roth has 30 years of experience in international minerals exploration and mining project evaluation.

Capella is engaged in the acquisition, exploration, and development of quality mineral resource properties in favourable jurisdictions with a focus on high-grade gold and copper deposits. The Company's copper focus is currently on the discovery of high-grade VMS-type deposits within 100%-owned, district-scale land positions around the past-producing Løkken and Kjøli copper mines in central Norway. The Company's precious metals focus is on the discovery of high-grade gold deposits on its newly-acquired Finnish properties (Katajavaara, Aakenus), the 100%-owned Southern Gold Line Project in Sweden, and its active Canadian Joint Ventures with Ethos Gold Corp. (TSXV-ECC) at Savant Lake (Ontario) and Yamana Gold Inc. at Domain (Manitoba). The Company also retains a residual interest (subject to an option to purchase agreement with Austral Gold Ltd) in the Sierra Blanca gold-silver divestiture in Santa Cruz, Argentina. 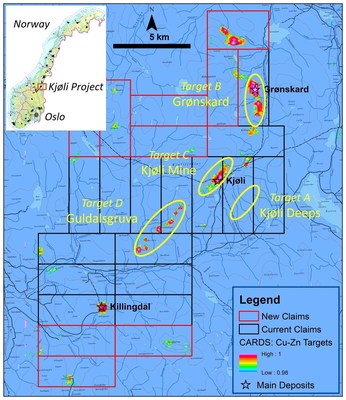