Exploration and Drill Update for the Savant Gold Project, Ontario

Prospector is currently earning-in to a 70% interest in Savant through the sole funding of CAD 2M of work commitments on this highly-prospective but underexplored property, and by making staged cash and share payments to Capella.

Eric Roth, Capella's President and CEO, commented: "I am pleased to be reporting today that Prospector Metals Corp. continues to generate new high-grade gold targets from ongoing exploration activities at Savant. Previous work had focused almost exclusively on high-grade gold targets in deformed iron formation units, however, Prospector's current sampling program has confirmed the potential of the Wiggle Deformation Zone to be a significant target in its own right. Prospector also reiterates its intention to begin core drilling at Savant during Q3, 2022, and we look forward to keeping the market updated on progress." 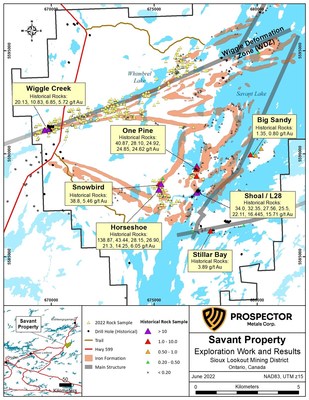 The technical information in this news release relating to the Savant gold project has been prepared in accordance with Canadian regulatory requirements set out in NI 43-101, and approved by Eric Roth, the Company's President & CEO, a Director, and a Qualified Person under NI 43-101.  Mr. Roth holds a Ph.D. in Economic Geology from the University of Western Australia, is a Fellow of the Australian Institute of Mining and Metallurgy (AusIMM) and is a Fellow of the Society of Economic Geologists (SEG). Mr. Roth has 30 years of experience in international minerals exploration and mining project evaluation.

Capella is engaged in the acquisition, exploration, and development of quality mineral resource properties in favourable jurisdictions with a focus on high-grade copper(-zinc-cobalt) and gold deposits. With respect to its base and battery metals projects, the Company's current focus is on: i) the determination of a NI 43-101 compliant Mineral Resource Estimate for its 100% owned Hessjøgruva project in central Norway, which will subsequently lead to further drill hole planning and initial development-related studies, and ii) the discovery of further high-grade VMS-type deposits in district-scale land positions around the past-producing Løkken (Løkken Verk District) and Kjøli / Kongensgruve (northern Røros District) copper mines.

The Company's precious metals focus is on the discovery of high-grade gold deposits on the Katajavaara-Aakenus JV in Finland, its 100%-owned Southern Gold Line Project in Sweden, and its active Canadian Joint Ventures with Prospector Metals Corp (TSXV: PPP) at Savant (Ontario) and Yamana Gold Inc. at Domain (Manitoba). The Company also retains a residual interest (subject to an option to purchase agreement with Austral Gold Ltd) in the Sierra Blanca gold-silver divestiture in Santa Cruz, Argentina.

Vancouver, BC – June 28, 2022, Prospector Metals Corp. ("Prospector" or the "Company") (TSXV:PPP) (OTCQB:ETHOF) (Frankfurt:1ET) is pleased to provide an update on its fully funded exploration program at the Savant Project in northwestern Ontario.  Prospector mobilized field crews to the Savant Project in May, completing a thorough prospecting and sampling Phase 1 exploration program which included ground truthing key target areas to be followed up by drilling Q3, 2022. A total of 594 grab samples were collected during the Phase 1 program for which 155 assays have been received to date; the remaining 439 are pending.

Assays received to date from the Wiggle Creek prospect (Figure 1 and 2) confirm the presence of a gold bearing shear zone (6.72 and 6.13 grams per tonne gold or "g/t Au") characterized by sheared and silicified iron formation and related metasediments with abundant quartz veining, chloritization, and sulphide mineralization. In addition, new rock grabs collected in previously unsampled areas, 300m and 800m along strike, assayed 2.34, 68.6, 26.5, and 4.3 g/t Au. The Wiggle Creek prospect represents a strike length of 1.3km of known gold bearing structure which remains open in all directions.

Dr. Rob Carpenter, Co-Chairman stated: "We are very encouraged by these early results from our Phase 1 prospecting and sampling program at Savant. These results suggest the presence of robust mineralised structures with significant strike length. Additional assays, coupled with the high-resolution magnetic data and new LiDar data will help refine our targets for drilling." 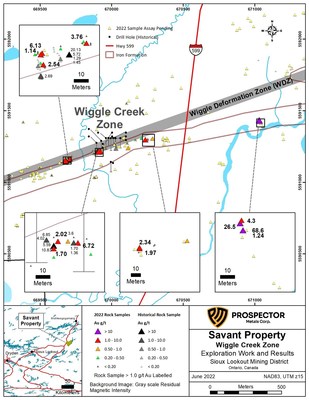 Prospector acquired a 70% option on the 229 km2 Savant Project in Ontario from Capella Minerals Ltd.  There is an estimated 60 km in strike length of prospective gold bearing iron formation on the property.  High grade gold mineralization at surface and in historical diamond drilling occurs over an approximately 10 km x 10 km area representing a district scale opportunity in a region that has seen little systematic exploration.  Geologic mapping and magnetic data suggest there are multiple untested gold favourable sites (fold hinges) in iron formation; important structural controls at the past producing Lupin and Homestake mines.

In the fall of 2020, Prospector conducted a high-resolution airborne magnetic survey to aimed at mapping zones of folding and structure within the iron formation prospective for gold mineralization. The product of this survey provided much greater detail than any previous survey greatly facilitating the targeting work. Comprehensive historical data compilation along with geological and geophysical reinterpretation is ongoing.

The technical content disclosed in this press release was reviewed and approved by Jo Price, P.Geo., M.Sc., VP Exploration of Prospector, and a Qualified Person as defined under National Instrument NI 43-101 ("NI 43-101").

Prospector Metals Corp. is a Discovery Group Company with a business model focussed on district scale, early-stage exploration of gold and base metal prospects and create shareholder value through new discoveries.  The Company's focus is to identify underexplored or overlooked mineral districts which display important structural and mineralogical similarities with well-endowed mining camps. The majority of the projects acquired by Prospector occur in Ontario, Canada, which is a tier-1 mining jurisdiction with abundant overlooked geological regions with high mineral potential. Prospector engages proactively with local and Indigenous rightsholders and seeks to develop relationships and agreements that are mutually beneficial to all stakeholders.

On behalf of the Board of Directors,

This press release contains certain "forward-looking statements" within the meaning of Canadian securities legislation, including, but not limited to, statements regarding the Company's plans with respect to the Company's projects and the timing related thereto, the merits of the Company's projects, the Company's objectives, plans and strategies, and other project opportunities. Although the Company believes that such statements are reasonable, it can give no assurance that such expectations will prove to be correct. Forward-looking statements are statements that are not historical facts; they are generally, but not always, identified by the words "expects," "plans," "anticipates," "believes," "intends," "estimates," "projects," "aims," "potential," "goal," "objective,", "strategy", "prospective," and similar expressions, or that events or conditions "will," "would," "may," "can," "could" or "should" occur, or are those statements, which, by their nature, refer to future events. The Company cautions that Forward-looking statements are based on the beliefs, estimates and opinions of the Company's management on the date the statements are made and they involve a number of risks and uncertainties. Consequently, there can be no assurances that such statements will prove to be accurate and actual results and future events could differ materially from those anticipated in such statements. Except to the extent required by applicable securities laws and the policies of the TSX Venture Exchange, the Company undertakes no obligation to update these forward-looking statements if management's beliefs, estimates or opinions, or other factors, should change. Factors that could cause future results to differ materially from those anticipated in these forward-looking statements include the risk of accidents and other risks associated with mineral exploration operations, the risk that the Company will encounter unanticipated geological factors, or the possibility that the Company may not be able to secure permitting and other agency or governmental clearances, necessary to carry out the Company's exploration plans, risks and uncertainties related to the COVID-19 pandemic and the risk of political uncertainties and regulatory or legal changes in the jurisdictions where the Company carries on its business that might interfere with the Company's business and prospects. The reader is urged to refer to the Company's reports, publicly available through the Canadian Securities Administrators' System for Electronic Document Analysis and Retrieval (SEDAR) at www.sedar.com for a more complete discussion of such risk factors and their potential effects